“Mondays with Mary” – Mary and the Church

The following words are from a sermon by Blessed Isaac of Stella, Abbot. This was the second reading in Saturdays Office of Readings. One of the priests I work for at Our Lady of Perpetual Help, Fr. Chad, texted me about this great reading and told me to check it out if I had time. I was moved after reading this excerpt from Blessed Isaac of Stella and decided at that point that I would use it for this week’s “Mondays with Mary.” Instead of saying too much at this point – just read and re-read the words of Blessed Isaac today and allow them to penetrate your heart this day. 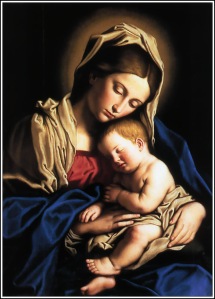 “The Son of God is the first-born of many brothers. Although by nature he is the only-begotten, by grace he has joined many to himself and made them one with him. For to those who receive him he has given the power to become the sons of God.

He became the Son of man and made many men sons of God, uniting them to himself by his love and power, so that they became as one. In themselves they are many by reason of their human descent, but in him they are one by divine rebirth.

Both are mothers, both are virgins. Each conceives of the same Spirit, without concupiscence. Each gives birth to a child of God the Father, without sin. Without any sin, Mary gave birth to Christ the head for the sake of his body. By the forgiveness of every sin, the Church gave birth to the body, for the sake of its head. Each is Christ’s mother, but neither gives birth to the whole Christ without the cooperation of the other.

In a way, every Christian is also believed to be a bride of God’s Word, a mother of Christ, his daughter and sister, at once virginal and fruitful. These words are used in a universal sense of the Church, in a special sense of Mary, in a particular sense of the individual Christian. They are used by God’s Wisdom in person, the Word of the Father. 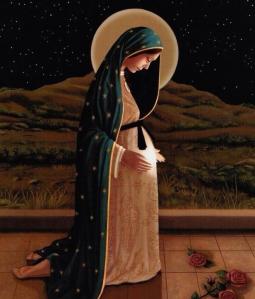 As we approach the coming days of Christmas, it is important to reflect on Mary as not only Our Mother, but also her role with the Church that her Son established. In the Church, we see Mary; and in Mary, we see the Church. The Church is there to guide us just as a mother. Our Blessed Mother guides us closer to her Son, Our Lord Jesus Christ. One cannot separate Christ from the Church nor the Church from Christ – they are one in the same. Neither can you separate Christ from the rest of the Body for he is the Head of the Body.

Join me in praying for the victims, their families, the Catholic community, and all involved in Newton, CT. May they find healing and strength from such a tragic event. Our Lady of Sorrows and St. Rose of Lima…Pray For Us!

Tagged as: Blessed Isaac of Stella, Blessed Mother, Body of Christ, Mary and the Church, Our Lady of Sorrows, Virgin Mother