“Mondays with Mary” – The Immaculate Conception

Traditionally on the Liturgical Calendar, the Solemnity of the Immaculate Conception falls on December 8, however, this year we celebrated the Second Sunday of Advent. When a memorial, feast, or solemnity falls on a Sunday, the Sunday Liturgy takes precedence. Although the Solemnity of the Immaculate Conception was transferred to today, it is not a Holy Day of Obligation, but I would still encourage you to attend Daily Mass if you can.

For today’s post, I have used St. Thomas Aquinas’ pedagogy from the Summa Theologica to teach and explain the Dogma of the Immaculate Conception. The information was researched from Mark Miravalle’s, Introduction to Mary and my notes from the class – Mary in the Modern World. Hope you enjoy!

Article: What is the Dogmatic Teaching of the Immaculate Conception?

Objection 1. St. Bernard of Clairvaux did not believe in the Immaculate Conception because he thought the conception of Mary violates the means of how original sin is transmitted. He thought that the infected bodies of the parents transmit to the soul of a child. Other theologians also believed that if Mary were immaculately conceived, why would she be in need to be redeemed by Jesus Christ.

Objection 3. There is no mention in the Holy Scriptures of the Immaculate Conception – so where do Catholics come up with this dogma as being Scriptural?

St. Severus, Bishop of Antioch (d. 538) states: “She [Mary]…formed part of the human race, and was of the same essence as we, although she was pure from all taint and immaculate.” (Hom., cathedralis, 67)

St. Andrew of Crete (d. 740) tells us that the Redeemer chose “in all nature this pure and entirely Immaculate Virgin.” (Hom. 1 in Nativ. Deiparae) 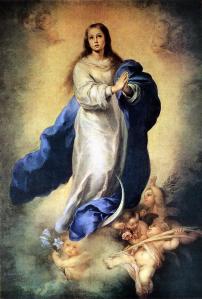 I answer that; Blessed Pope Pius IX declared the Immaculate Conception solemn with an infallible statement (ex cathedra – from the chair) on December 8, 1854. The precise definition states: “We declare, pronounce, and define, the doctrine which holds that the Most Blessed Virgin Mary by her conception, was preserved immune from all stain of sin, by a singular grace and privilege of the Omnipotent God, in view of the merits of Jesus Christ, the Savior of the human race, was revealed by God and must be firmly and constantly believed by all the faithful.” From the moment of her Conception, Mary is preserved from original sin and all its effects. Mary is not redeemed. To be redeemed is to be bought from the slavery and bondage of Satan/sin. She is not under the bondage of sin and is not bought back. Mary does not get “muddy” and is not affected by sin. She does NOT commit mortal or venial sin and does NOT have concupiscence (the inclination to sin).

Reply to Objection 1.  Blessed John Duns Scotus answered St. Bernard of Clairvaux and other theologians by explaining that original sin does not transmit from the infected parents to the soul of a child. He said that original sin was present on the soul of the child at conception because of the lack of sanctifying grace. While Blessed Scotus did refute these theologians, the final theological explanation on the Immaculate Conception would come from the Magisterium guided by the Holy Spirit.

Reply to Objection 3. Genesis 3:15 is the primary Scripture verse for the Immaculate Conception. God is addressing the serpent. He says that there will be enmity (total and complete opposition) between you and woman, your seed and her seed. He/She (Jesus/Mary) will crush your head and you shall lie in wait for her (Mary) heal. The serpent (not a snake, but a dragon) is Satan. The seed of the serpent is sin, all evil humans, and all evil angels. The seed of the woman (Eve at first, but its Mary. A prophetic text – see below) is Jesus Christ, who conquers all sin. The woman in Genesis 3:15 is different from the woman in Genesis 3:16. The woman in Genesis 3:16 is Eve – she is not victorious; she suffers with sin, and is dominated by her husband. Genesis 3:15 is known as the Protoevangelium – First Gospel.

The second Scripture verse comes from the New Testament in Luke 1:28 – The Annunciation. The angel Gabriel speaks the words, “Hail, Full of Grace.” The Greek term is “kecharitomene” which translates to “having-been-graced one” or something to that effect, it’s a perfect participle. It is stating the action was completed in the past but with a relevance to the present. Such as – you who have been perfected in Grace or you who have been transformed in Grace. It is an action completed in the past but relevant to the present. The angel is using the term – “kecharitomene” as a name for Mary and the event that has happened to Mary in the past (her Immaculate Conception). The angel is calling her a new name that fulfills her mission. Blessed John Paul II said, she is full of Grace called upon to the mission of redemption. Where Eve brought death, Mary, the New Eve, brings life.

Reply to Objection 4. No – the Immaculate Conception occurred over 2000 years ago and has nothing to do with the National Football League. The Immaculate Reception is one of the most famous and controversial plays of all time in American football. It happened in an American Football Conference divisional playoff game on December 23, 1972 between the Pittsburgh Steelers and the Oakland Raiders at Three Rivers Stadium in Pittsburgh, Pennsylvania. You can read about the play here and watch it here.